We have had a very hectic but exciting week last week we travelled far and wide hog roasting! This year has been our busiest by far and we haven’t stopped from first thing in the morning until last thing at night. Sunday we were up north catering for the turning on of the Christmas lights and we have done a few these past few weeks, this one was on a huge scale and we catered for nearly two thousand  with our hog roast Worsley and it was lovely and the snow even fell too! 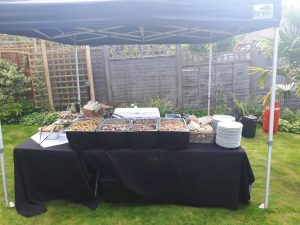 We arrived early morning and no time to waste we set up the gazebo and the machines two pigs were to be cooked along with some chickens and when I say some I mean hundreds. The meat takes care of its self on the wonderful machines who do all the hard work. As the hog roast Worsley cooked we began to prepare the side dishes we sliced and diced heaps of lettuce, tomatoes, spring onions, beetroot, red cabbage and placed them all in huge bowls. We then made lots of creamy coleslaw and dozens of dips including garlic, honey and spicy which go well with any meat. We then had the task of unpacking the big boxes of fresh buns all freshly baked and that was a huge quest but one that has to be done we make sure everything is freshly baked for each event. We were right on queue and the meats were just about cooked as the crowds began to gather we watched the turning on of the lights and just then we had a sprinkle of snow and it just made the event that bit more special. Then it was on to feed the crowds everyone gathered was commenting on how amazing the smell was and the watched as our chef carved the meats and placed them in huge heated containers and the guests helped themselves to the meat making sandwiches, it flew by and we soon had every one fed with nothing to space and a few had second helpings. We were thanked by the promoter and he said he was so impressed at how we managed to feed everyone but to us its nothing as we are well used to it and we get such satisfaction from another job well done here at hog roast Worsley.