Karaoke is so commonplace nowadays it is very difficult for publicans to put their own spin on it to make local pub-goers choose a night of DIY singing in their establishment, rather than another pub up the road. Darren and Pete who run a pub in the area, thought long and hard about how to revamp their own weekly karaoke night, which had dwindled in popularity so much that it had reached the point where it was only the same handful of regulars singing the same songs week after week. After putting their heads together, they came up with the idea of having a different theme every week, by genre, era or theme. For their karaoke comeback relaunch party, they decided on a duets theme, with participants having to team up with their spouses, partners and mates to perform famous duets across the spectrum of popular music. They knew however, that they would need an extra incentive to reignite everyone’s interest, with the hope of keeping all of the local karaoke kings and queens coming back week after week. Then Pete came up with the perfect idea- he suggested to his business partner that they hire Hog Roast Rochdale to tempt the punters in and reward everyone brave enough to take to the stage, with a free hog roast buffet!

Darren had to give credit where credit was due and commend Pete on his inspired idea! 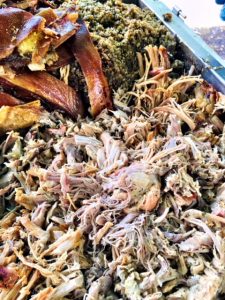 With the enticing aroma of Hog Roast Rochdale’s slow-roasted pork wafting across the stage towards the formally underused karaoke machine, there was suddenly a queue of courageous crooning couples all eager to belt out a Kenny and Dolly or George and Aretha classic duet! They may not have hit all the notes and got all the lyrics right, but it was an incredibly entertaining evening and the atmosphere in the pub was electric! As each couple who had taken to the stage were rewarded for their efforts with a plateful of perfect pulled pork, velvety apply sauce and crunchy crackling served in a freshly baked bun (with a gluten free option of course!), it was clear the karaoke had indeed made a rather successful comeback in Darren and Pete’s pub! They thanked the Hog Roast Rochdale team for the part we played in making in all happen and they will definitely ask us to come back if they need any more inspiration!